BY A WHISKER - an exhibition currated by Viktorija Damerell and Ona Juciūtė in TITANIKAS gallery space, Vilnius, 4 - 28 February, 2016 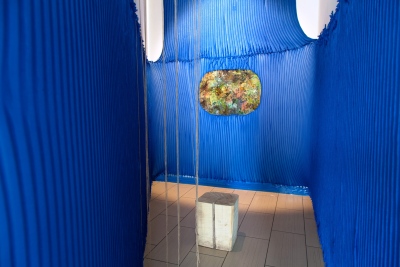 The exhibition presents a glimpse into matter‘s ‘inside-out’ - where a sense of what can best be described as unknown reality‘s endless strata appears. We find ourselves by a whisker from the moment to grasp them, but as soon as we make an effort to capture them, they electrify, lift up in the air and stick to our clothes.
The art pieces in the exhibition, in a variety of ways, explore the specific moments that attempt to expose those cracks or gaps in what we often dismiss as ‘the common’. These cracks allow us to perceive or experience reality with a different kind of intensity, and, at times, to face that which is invariably lost due to our conscious efforts at identifying and structuring. ‘The mind knows in part, in part and parcel, with full stop after every sentence but the emotional soul knows in full, like a river or flood.’ wrote the English novelist D. H. Lawrence. A description of the general aim of the participating artists can, perhaps, best be explained through a series of negations. The exhibitors are neither using media in order to communicate specific messages nor, on the other hand, to simply create attractive images. They are not attempting to express poetical metaphors. Furthermore, they do not claim that their artworks are in any way independent of the material world without a possibility for our mind to access them. Even though these artists appear to have a desire not to participate in acceptable forms of social or cultural discussion, they still use recognisable cultural coding, displayed through materials, images and sounds, but with an overriding need to generate experiences that avoid or disturb rationality.